For this example, let's assume you're an online gamer - specifically, a Quake III player (though the following is representative of any online game really - MMORPG, RTS, racing sims, fighting games, etc.). You've got two servers that are running the same maps you like to play, so the only issue you have is which one out of the two is going to give you a better connection. We realize some folks aren't going to be so patient as to use the method below to decide which server they're going to play on... but bear with us here. We're learning! The same topics we go over in this section, as far as graph interpretation, are also applicable if you were trying to figure out why a connection to a specific server you were just playing on is so cruddy.

The first thing you need is the IP addresses or DNS names for the two servers. You'll launch PingPlotter, enter the IP address of the first server into the Address to Trace box and click the Trace button. 2.5 seconds is a good value for the trace interval, and the # of times to trace should be unlimited (we're gonna watch it for awhile). Then, start a trace to your second server's IP address using the same settings you used for the first server.

You then go get yourself a Diet Pepsi, do some stretches or whatever in preparation for a night of gaming. When you get back to your computer you'll have two graphs that look similar to the ones below. Let's analyze both and see which server you want to play on. 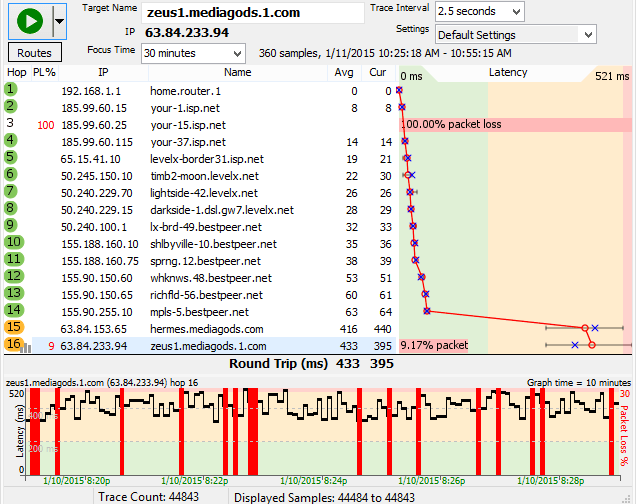 Hmm. This doesn't look too bad until you get to hop 15 and start looking at the history graph. Let's take the time line graph first.

Red is bad. Every time you see red on the history graph you had a timeout, or in other words there's dropped packets. Packet loss is the bane for most online games. When you're running across a big open area and then all the sudden *blip,* you're on the other side (and most likely dead), that was more than likely caused by timeouts, or packets you didn't get to (or back from) the server. Besides the red lines on the history graph, you can also see your packet loss in the PL% column and, if you look at hop 16, the horizontal red line contains your packet loss value.

Digging a bit deeper, you can see that you're running under 100ms all the way down until you hit hop 15. Notice that you move off of LevelX's backbone into BestPeer between hops 8 and 9. No problem there, there's plenty of bandwidth between those two providers since the time doesn't really go up. From the DNS on hop 8, we can see that hop is a gateway (thus the "dsl-gw7" part of the name) to some DSL customers. Where we start running into problems is when we get off of BestPeer and hit the Mediagods domain that's hanging off the DSL link. All the sudden your latency goes up to 400+ms at hop 15. That DSL connection is busy. Once you make it to the server at hop 16, not only is your latency still way up there, but you're getting 9 to 10% packet loss. That server is a busy bee also it seems. So busy that he's not keeping up. Combined with the bandwidth saturation we're getting on the DSL line itself, it's best to try later. We don't want to play here. 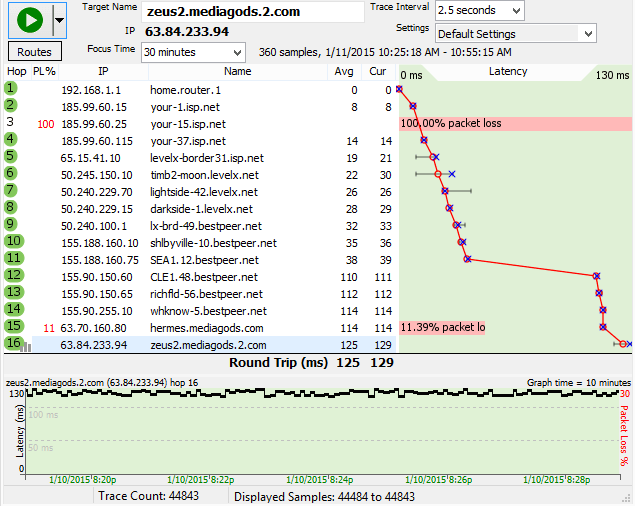 Now this is more like it. Really, anything under 150 ms is a great connection. We don't even make it over 40ms until hop 12. Sweet.

Let's look at that connection between hops 11 and 12. Notice from the DNS names that you actually go from Seattle across Global Crossing's backbone to Cleveland. When you factor in speed of light latency, you can account for about 40-50ms of your latency to hop 17 with that hop across the backbone between hops 11 and 12. So you've got a 120-130ms ping to hop 16. That's pretty good. If you didn't have that fat pipe installed (and were instead running a modem) you'd probably be running at about 220-230ms for your latency.

"What about that 11% packet loss at hop 15?", you ask. Judging from the numbers for that hop and hop 16, what we're most likely dealing with here is a router that probably has a low priority for ICMP packets. A lot of network admins will set a router up to drop ping/ICMP packets first if it starts getting busy - have a look here for more details

So which server are you going to play? Obviously it's the second server above.

Your graph results can be affected by a number of things that are out of PingPlotter's control.

One thing you can do is save your trace data to a text file and post it up on a support message board for the particular game that you're playing. Even better, save off a graph and post it instead. Many savvy game server admins will actually do a traceroute (or even better a PingPlotter trace... *smile*) back to you and be able to tell you if there's problems with a route back to you when asymmetrical routes are involved.

There are some sites that can do traceroutes back to you if you want to investigate on your own. They can be found here.

In closing, we can't emphasize this enough: latency is the bane of online gaming. Much more so than bandwidth limitations. The good thing is that PingPlotter can tell you this latency, and provide you with ammo in the way of trace and graph data when you're beating up on your ISP.