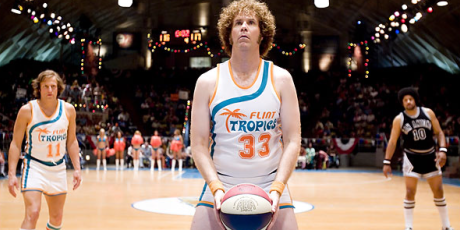 Learn How to Use Pingplotter for Games

Online gaming is a blast. Unless your ping is higher than your IQ. If that's the case, you'll be lagging so hard your bullets won't hit anything until yesterday — nobody is gonna want to play with you. It sucks, but you can do more than flip your router on and off. The key is getting your problem in front of the right people. Testing the network for the source of the problem is the best way to figure out who the right people are, but beware, there is a chance you are the right people.

Why not go straight to the game company?

If Mario knew which castle the princess was in, he could have gone straight to the prize instead of wasting time-saving a bunch of Toads. Nothing against the dudes in the other castles. It's just Mario had an objective, and knowing the right castle would have given him a shortcut. Fixing game lag is similar — better information gets you to the source of lag problems faster. It helps you fix the right problem, with the right people, instead of hitting dead ends with tech support. 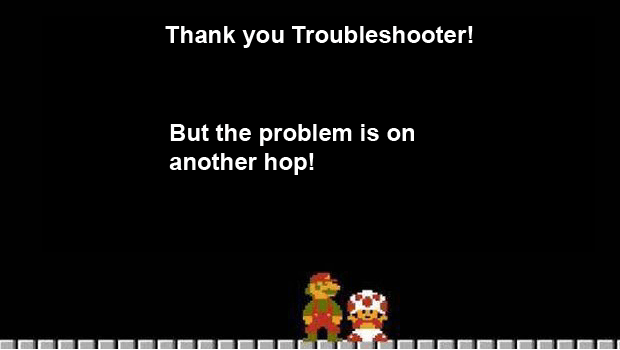 It is possible to experience game lag not caused by the game server. In fact, network problems occur in three general places:

Your solution path depends on where the problem is located, and diagnosing the right problem before you begin saves time and frustration. A little upfront work can be time well spent.

You can find the source of lag problems the same way technicians at the game companies do — by analyzing your network. The basic concept behind finding the culprit is testing the network and looking for places where performance breaks down between you and the game server. When you're testing a game server connection, a common pitfall is testing the company website (e.g. http://worldoftanks.com/) instead of the server that is actually hosting the game (e.g. 162.213.61.57). Sometimes lag only affects a game server, so it's important to make sure you're testing the right target. Usually, the correct server address can be found on the game's website or forum. A quick email to their support team can get you the information you need as well. Once you've found the right target, you're ready to start testing the network.

Every computer has built-in tools for measuring network performance. Those tools are ping and traceroute. Ping tells you the number of milliseconds it takes your computer to get a response from a server. This measurement is commonly referred to as latency.

It's great for letting you know if your network is fast or slow but doesn't tell you what's slowing it down. That's where traceroute comes in handy. Instead of only measuring response time for the game server, traceroute measures every router, or hop, between your computer and a target destination.

With traceroute information, the goal is to inform a diagnosis that looks something like:

"Response times look good until the third hop. After that, they almost triple. That must mean hop 3 or 4 is involved with the problem."

In reality, forming a reliable diagnosis with a single traceroute does not happen. Network performance varies naturally over time. If you run a single test, you run the risk of capturing data that does not represent the actual situation. A crap load of tests over a period of time will give you a better understanding of how the network is actually behaving. We still have a problem though. Traceroute is a command line tool, which most users don't know or want to use.

Plus, finding useful information in a series of traceroutes kind of sucks. That's why technicians at companies like Wargaming ask for a PingPlotter test when you come to them with a potential network problem. It makes their job easier by continually testing the network and graphing the results over time. 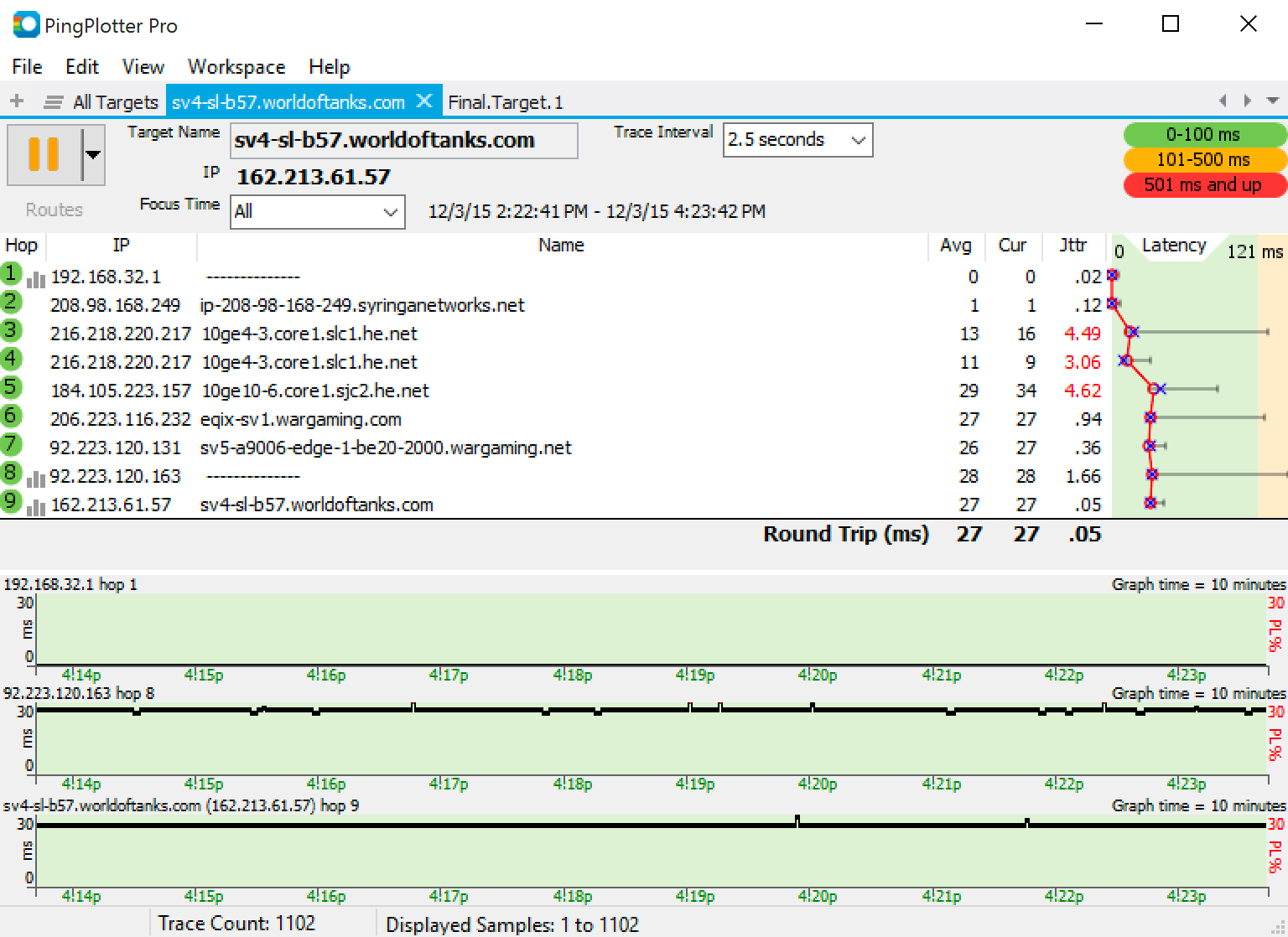 Finding interesting performance patterns in a color-coded graph is easier than finding them in a heap of text output. If you're interested in getting the right diagnosis faster — the tool is worth looking into, and the free version should get the job done for most gamers. Next, we'll be using PingPlotter to illustrate how different network problems look, but the concepts still apply if you're using the command line or another tool.

How do network problems look in PingPlotter?

Below is a close up of PingPlotter's trace graph. The trace graph shows current performance for every hop (router) between your computer and a target (the game server). In the illustration below we have added labels to show you the different sections of network.

Hint: Local and game networks might consist of more than one hop. You can tell which hops belong to the same network by checking if the digits before the first dot match (nerds refer to each of the four numbers in an IP address as octets).

After you're comfortable making assumptions about which hops belong to what network, it's time to start hunting for problems. When you're looking at network performance the more important rule to keep in mind is all that really matters is the final destination. After you find poor performance at the final destination, follow the pattern back to its origin and that will inform you about the network(s) involved with the problem. Here are some examples: 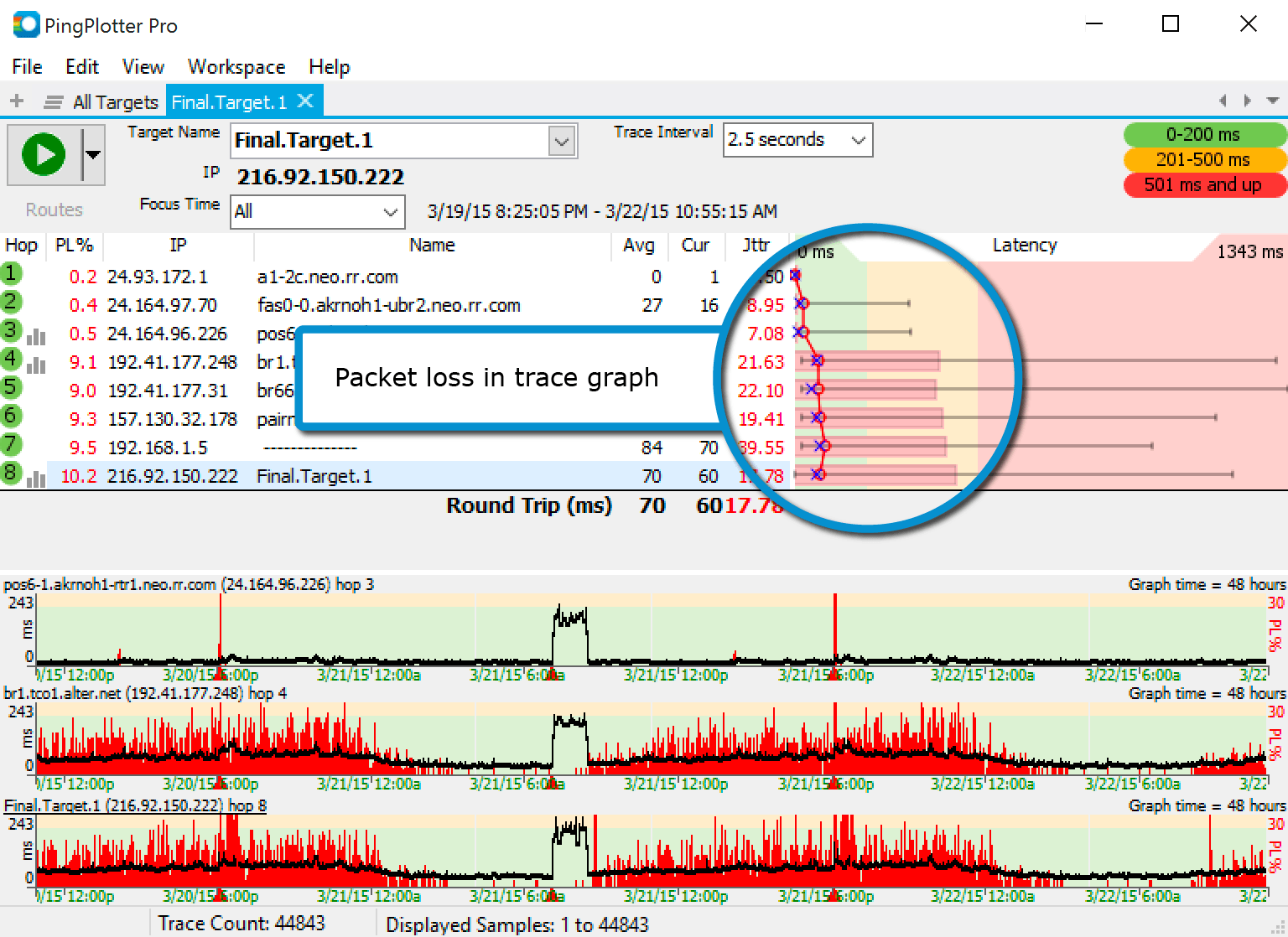 In this example, packet loss (red bars in the trace graph) starts on Hop 4 and continue through to the end of the route. Patterns like this indicate a problem. Packet loss that starts in the middle of the route implies an ISP related problem. If packet loss only appeared at the final hop, it would imply the problem has to do with the game server.

To fix problems outside the network you control (assuming you can't control your ISP or game provider) you need to enlist help from people who control those networks. The general approach is to contact the organization and present evidence that suggests they are the problem. Most of these companies are going to request PingPlotter tests so presenting a case built with PingPlotter... well, that's gonna speed up the process. More advice on how to effectively get help from people who control the networks you play on is available in our Step-by-Step Troubleshooting Guide.

To contrast, here is an example where PingPlotter does not show a problem. 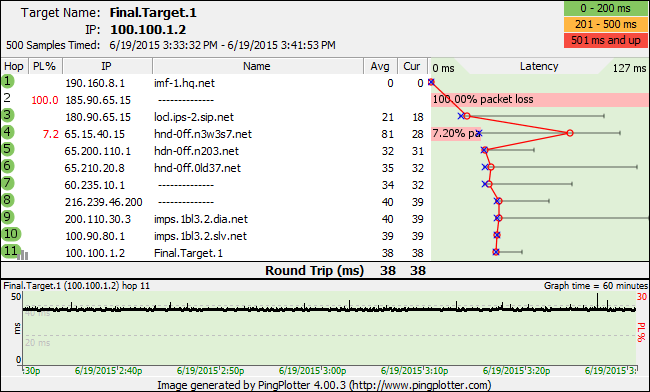 There is packet loss in the route, but it does not continue through to the final destination. One poorly responding router is nothing to worry about. Some routers are programmed to ignore pings to reduce their workload.

Here's another example of a problem. Which network do you think is the culprit? 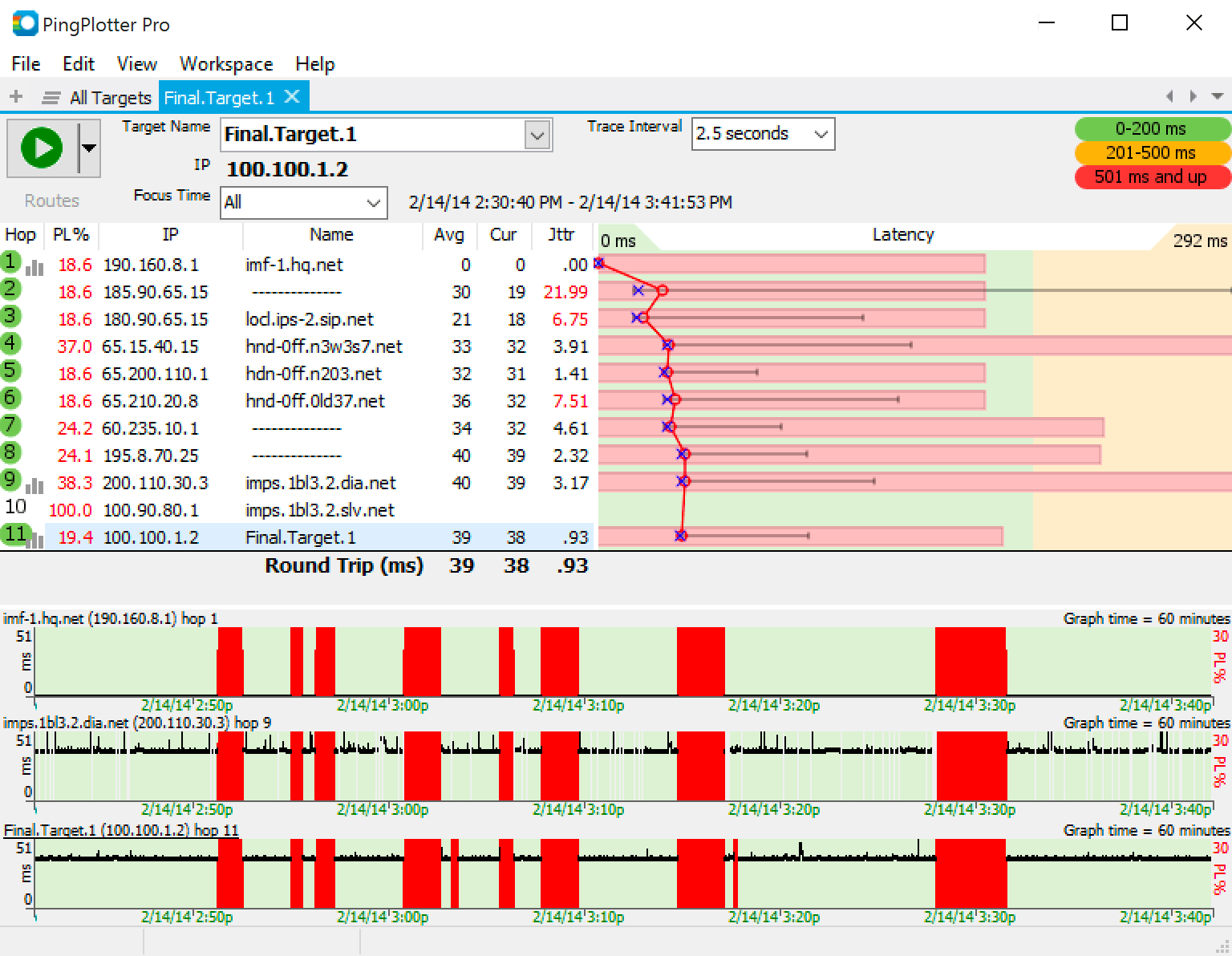 Find the problem before you start fixing it

Jumping to conclusions about the cause of your game lag is a great way to end up frustrated by tech support. You can avoid frustration and save time by collecting some data and forming ideas about the cause of the problem. When you're ready for a tool that packs a little more punch than your command line, PingPlotter is available free and includes a free 14-day trial of premium editions. If you're interested in learning more about the art of network troubleshooting, that's awesome — we've only just scratched the surface here. Check out www.pingplotter.com for more articles.